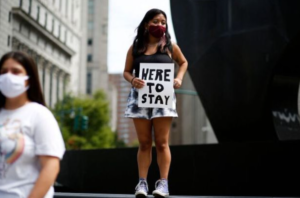 The push coincides with this week’s 10th anniversary of the Deferred Action for Childhood Arrivals program, which provides deportation protection and work authorization for more than 600,000 immigrants who were brought to the US without authorization as children.

DACA recipients aren’t eligible for coverage under the Affordable Care Act and lack full access to Medicaid and other programs. Many lack health insurance.

“While the DACA program has been a lifeline for hundreds of thousands of immigrant youth, receipt of DACA has not ended their barriers to health services or improved health outcomes,” a new National Immigration Law Center report says.

The analysis, exclusively provided to Bloomberg Government, cites a survey of more than 1,000 DACA recipients, with more than a third saying they lacked health insurance. Almost 20% said they lost their employer-sponsored coverage during the Covid-19 pandemic.

Advocates are imploring President Joe Biden to address the coverage gap through executive action, a change that would add significant protections for young immigrants without having to go through Congress.

“This is one of the areas where Biden can actually do something that will immediately improve the lives of thousands of people and benefit all of us,” NILC Executive Director Marielena Hincapié said in an interview.

Any expansion of health-care access is likely to trigger criticism and potential legal challenges from Republican state attorneys general who already view DACA as beyond the federal government’s authority.

‘The Sad Truth’
DACA recipients’ ineligibility for Affordable Care Act coverage and related programs stems from a 2012 Department of Health and Human Services policy that excluded them from the agency’s definition of “lawfully present.”

Noncitizens who are considered lawfully present in the US, including many with temporary protections similar to DACA, have access to coverage under the ACA.