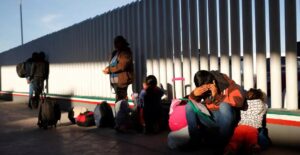 In one beating, the woman from El Salvador told the immigration judge, her boyfriend’s punches disfigured her jaw and knocked out two front teeth. After raping her, he forced her to have his name tattooed in jagged letters on her back, boasting that he was marking her with his brand.

The judge seemed moved by her testimony. In the hearing in September in the Baltimore immigration court, he found that the woman’s terror of going back to her country, where she said the boyfriend was lying in wait, was credible. But he swiftly denied her asylum claim, saying the danger she faced did not fit any definition of persecution under current interpretations of American law.

The outcome for the woman, identified in her confidential asylum case as L M, was the result of a decision in 2018 by President Trump’s first attorney general, Jeff Sessions. Setting aside two decades of precedent, Sessions ruled that domestic violence and most gang violence could not be the basis for asylum.

As president-elect Joe Biden moves deliberately to transition towards the White House, even while Trump refuses to accept defeat, he has laid out a fast-paced agenda to unwind Trump’s harsh immigration policies. But even if Biden quickly orders a final end to family separations and re-opens the border for asylum-seekers, his plans could stall without action at the justice department, which holds extensive power over the immigration system.

To carry out Biden’s proposals, his attorney general will have to reverse decisions by Sessions and Attorney General William Barr that sharply limited asylum, particularly for people like L M who are fleeing from Central America. Biden’s justice officials will have to contend with an immigration appeals court loaded by Barr with conservative judges known for denying asylum.