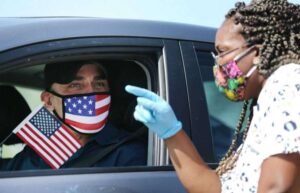 This year, California will lose a congressional representative for the first time in its 170-year-plus history. The state’s loss of one of its seats — which Congress allocates proportionally every 10 years based on U.S. Census counts — is a result of its relatively weak growth rate of 6.1% since 2010, compared to the national gain of 7.4%.

California’s growth was so sluggish, in fact, that it would have needed nearly half a million more people to keep the representative it lost, and it would have lost a second one had it grown by 284,400 fewer people.

This number happens to be very close to the 260,000-plus people that immigrated into California from other countries in 2019, the most recent year for which statistics are currently available. In other words, without California’s yearly influx of immigrants, the state probably would have lost far more representation than it did.

A Chronicle analysis of U.S. Census data found that while Americans are leaving California in greater numbers than they are entering it, people outside of the U.S. are still attracted to the Golden State in steady numbers. The state gained about 1 million new residents from outside the U.S. from 2010 to 2019.

The main component of California’s increasing population over the last decade has been the natural increase from the number of births outpacing deaths. Between 2010 and mid-2019, California had nearly twice as many births as deaths, adding about 2.2 million people. While international migration remained strong, overall net migration —both domestic and international — contributed far less to population growth, adding just 110,000 people to the state’s population.