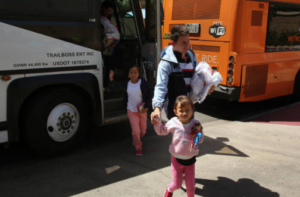 WASHINGTON, D.C. – Just before its six-week recess, the House passed a budget bill, supported by President Donald Trump, that increases both domestic and military spending and that suspends the debt ceiling for two years. The Senate did the same thing Aug. 1, ahead of going on its own recess.

One estimate had the federal government spending $320 billion more as a result of the bill. Another estimate had the government on track to spend about $4 trillion during the current fiscal year, although it would take in only about $3 trillion in revenue – a deficit of $1 trillion.

But this story is not about that bill. However, given that elected officials in both parties seem to be comfortable with deficit spending, it makes one wonder what U.S. immigration policy would look like if money were no object.

Would a wall be built along the entire U.S.-Mexico border? Would the government ship 11 million immigrants living in the United States illegally by bus – or plane – back to their home countries, and hang the expense? What would enforcement and the judicial process look like, not to mention the Deferred Action for Childhood Arrivals program, known as DACA, and the DREAM Act?

“They need more resources,” Rep. Dan Lipinski, D-Illinois, said of Customs and Border Protection and its Border Patrol agents. He visited the border July 19. When visiting with CBP agents, “they asked, for example, if a change could be made, that the CBP can hire people who would be civilians who would do some of the jobs that they are required to do in taking care of immigrants being detained,” he added.

“I think we need to hire more judges so that cases can be heard more quickly, adjudicated more quickly. I think that would help tremendously,” said Lipinski, a Catholic.

Ira Mehlman, spokesman for Federation for American Immigration Reform, or FAIR, which advocates for stricter immigration policies, did not sound unduly upset with the idea of an expanded wall.