Home Federal Enforcement With Record Arrests at the Border, Immigration a Political Flashpoint Before Election 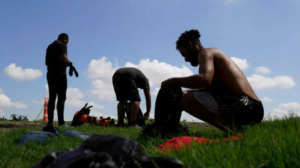 WASHINGTON — U.S. agents have arrested a record 2 million undocumented immigrants at the U.S.-Mexico border this year and 1 million have entered legally to seek asylum, making immigration policy and enforcement a political flashpoint before midterm elections.

Public surveys show the public divided along partisan lines with Republican-leaning citizens favoring enforcement and deportation, and those who vote Democratic supportive of asylum seekers and citizenship for so-called Dreamers, those brought here illegally as children.But a majority of Americans want stronger enforcement, according to a Pew Research Center survey.

With the election as a backdrop, Republican governors in Florida, Texas and Arizona have shipped asylum seekers to Democratic cities in New York, Massachusetts and to Washington — a tactic that has delighted GOP supporters and drawn Democratic scorn.

President Joe Biden condemned the political-year tactics by Republicans as “playing politics with human beings, using them as props.” He made the comments at the Congressional Hispanic Caucus Institute’s annual gala

In Florida, Jared Kushner, the former president’s son-in-law, questioned using asylum seekers as “political pawns” by Republican Gov. Ron DeSantis, who along with Donald Trump is eyeing the 2024 presidential race.

DeSantis defended the tactic and the political ramification of highlighting the issue to voters.

“This is one where Republicans have the advantage,” DeSantis told talk show host Sean Hannity on Fox News.

There are no doubts that the Southwest border and federal agents are under strain.

This year there have been 2.4 million arrests of people entering the country, with 2.1 million arrests occurring along the 2,000-mile U.S.-Mexico border, according to U.S. Customs and Border Protection.

It is a record number, Customs Commissioner Chris Magnus said. There have been 1.3 million deportations.

The surge in migrants is partly due to Latin American refugees fleeing persecution from communist regimes in Venezuela, Cuba and Nicaragua, who have entered the United States and legally applied for asylum or deportation protection, and are awaiting their court hearings.