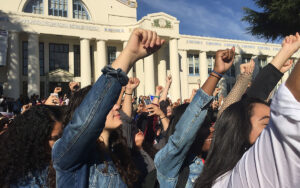 Immigrant rights advocates in California and nationwide will focus on pushing the Biden administration and Congress to enact immigration reform that includes a path to citizenship, after a judge last week declared DACA unlawful.

Thousands of high school and college students in California lost hope of obtaining work permits and deportation protection when a federal judge on Friday stopped the government from receiving new DACA applications.

Deferred Action for Childhood Arrivals, or DACA, offers temporary protection from deportation and permission to work for about 650,000 young people who came to the U.S. as children. The U.S. Supreme Court ruled last year that the Trump administration’s decision to stop the program was “arbitrary and capricious,” and an estimated 300,000 people became eligible to apply for DACA for the first time in December.

This included some 55,500 people who turned 15, the minimum age to apply, since the government had stopped accepting new applications. Yet the Supreme Court did not rule on whether the program was legal in the first place.

Advocates point to the latest ruling as evidence that DACA does not go far enough since it does not offer recipients a path toward legal permanent residency or citizenship.

The Obama administration began DACA in 2012 after Congress failed multiple times to pass more comprehensive immigration reform. The program offers two-year permits and protection from deportation, after which recipients must apply for renewal.

Ines Martinez, 19, turned in her application for DACA in December, just after the U.S. Citizenship and Immigration Services began accepting new applications.

A student at Cabrillo College in Aptos, near Santa Cruz, Martinez was not eligible for DACA before because when it began in 2012, she had not yet turned 15, and soon after she turned 15, the Trump administration stopped accepting new applications.

Martinez received word that her application was received in January, and in June, she was given an appointment to have fingerprints and photographs taken.