Home Politics Will the Supreme Court Be as Deferential to Biden on Immigration as it was to Trump? 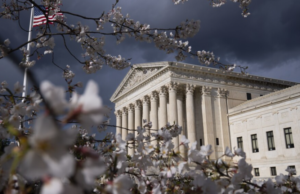 Another day, another hot-button issue at the U.S. Supreme Court. This time the question is whether the Biden administration must continue to enforce the Trump-era program known as Remain in Mexico. The policy requires asylum-seekers, mainly from Central and South America, to remain in Mexico while they wait for a hearing in a U.S. immigration court.

The Trump administration devised the Remain in Mexico policy in hopes of deterring migrants from streaming into the U.S. with asylum claims. The Biden administration suspended the program immediately upon taking office, but the 5th U.S. Circuit Court of Appeals, acting on a challenge brought by Texas and Missouri, ordered the new administration to continue the Trump policy. On Tuesday, the Supreme Court hears the argument in an expedited appeal.

The case centers on the meaning of numerous immigration provisions, how they have been interpreted for decades and, bluntly put, whether the Supreme Court will be as deferential to the Biden administration as it was to the Trump administration when it comes to immigration enforcement policies.

How the law works

Immigration law operates like a Russian nesting doll: You open it up, and another doll is inside and then another and another.

According to the states of Texas and Missouri, backed by 21 other red states, the law says that all asylum-seekers “shall be detained,” and “shall” means that they must be detained for however long it takes until their cases are decided in court.

“The administration basically has two choices,” says Indiana Solicitor General Thomas Fisher. “You either detain people seeking asylum at the border,” or “if you don’t have the detention space, you’re sort of left with returning them to Mexico.” Fisher wrote an amicus brief on behalf of 19 states supporting Texas and Missouri.

But that is not the way the law has ever been enforced by any administration, Democratic or Republican, including the Trump administration. In fact, while the “shall” language has been in the immigration law since 1903, so has other arguably contrary language, using qualifiers and words such as “may.”