Home Federal Enforcement Will The End of Title 42 Force Biden to Reform Immigration? 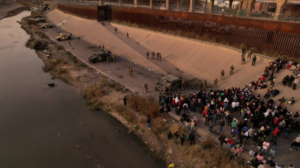 The controversial policy to turn away asylum seekers from crossing the country’s southern border, Title 42, is getting another life. At least for now.

First invoked during the Trump administration in March 2020, Title 42 is a portion of the U.S. Public Health code that allows immigration officials to stop asylum seekers from entering America in the name of public health.

The policy was set to end on Wednesday after a federal judge said in November the rule was unlawful. But Republican attorneys general from 19 states argued the Center for Disease Control didn’t follow the proper procedure to end the policy last April.

The Biden administration continued to use the policy with some changes, though the president has tried to end the policy this year. U.S. Customs and Border Protection estimates Title 42 allowed officials to turn away more than 2.4 million migrants, many of whom would have had the right to apply for asylum under normal circumstances.

Now, the Biden administration is furiously trying to finalize its plan for when the policy is likely struck down as tens of thousands of migrants have arrived near the southern border.

How can Biden reform the troubled immigration system? And what kind of system reimagining could both parties get behind?

Host David Greene discusses with Mo Elleithee, executive director of Georgetown University’s Institute of Politics and Public Service, on the left; and Sarah Isgur, staff writer at The Dispatch, on the right.

Is support for Ukraine in its war against Russia investing in a better world for all? And will America’s financial support be enough for Ukraine to get the upper hand?