Home Resources Why This Burned-Out Immigration Judge Quit Her Job 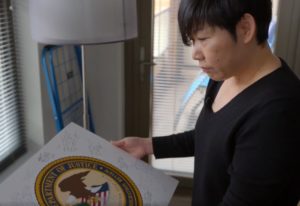 More immigration judges are stepping down due to pressures “to speed up and deport more.” One former judge shared her exclusive story with Newsy.

“These are the boxes that I brought with me when I stepped down from the bench. I have to confess that I’ve not had the heart to go through them and put them away yet. I loved being an immigration judge, I hope that comes through as well,” said Traci Hong.

Last November, Hong quit her job as an immigration judge. She says she left for the sake of her mental well-being. Hong had been on the bench for nearly 7 years and intended on staying much longer. She knew from the start that the job would be demanding and emotionally draining. But she says an already difficult job gradually became intolerable as a result of new Trump administration policies.

“So it’s not unusual for an immigration judge to hear stories of domestic violence, gang violence, political persecution from people who are fleeing their government. So you can’t tune out ever. I sort of compare it to surgery. If I made the wrong decision, I could very well send them back to harm’s way, sometimes to life or death,” Hong said.

In an effort to tackle the more than 1 million immigration cases awaiting decisions, the Trump administration introduced a quota of 700 cases a year for immigration judges in 2018. And it started tracking judges’ performances with real-time speedometers on their computer screens.

“So rather than deciding, ‘oh, you’re a good judge, or you’re a bad judge,’ because you made the right decisions in this case based on the law, it just became, ‘who cares what the decisions are, just make the decisions and get it done,'” Hong said.

The Department of Justice, which oversees immigration courts, tells Newsy that the quota reflects “the intent of Congress to adjudicate immigration cases within specified time frames.” The DOJ adds that speeding up caseloads ensures “that all who come before its courts will receive due process and a timely and fair adjudication.”