Home FEATURED BLOG POSTS WHY IMMIGRATION MATTERS DURING A PANDEMIC 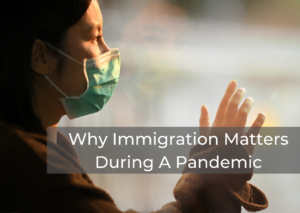 Although the previous administration tried to paint a halt on immigration as a necessary policy measure to combat the spread of COVID-19, it failed to address the dire catastrophe that must be redressed: population decrease. With the loss of over half a million lives in the U.S. due to COVID alone, all within the last year, heightened concern over the consequences is justified. The combination of deaths and immigration restrictions were factors that contributed to the current decline in the U.S. population rate. Most economists know that Keynes predicted grave consequences of population decline almost 100 years ago. Today economists world-wide are grappling with how to face the effects of COVID-19 such as unemployment, a reduction in the standard of living, a reduction in research and technological advancement, increase tax burdens for aging populations, and increase housing costs. In short, to enjoy the same life-style and a slice of the American “apple pie” as previous generations, we need more people to be living in, working in and contributing to our nation.

According to the experts, population growth fuels economic growth. Yet, after the 2020 census we are not sure exactly how many reside in the U.S. Although the Biden administration tried to redress the previous administration’s policy and include all immigrants in the 2020 census, there has been major redistricting after the census bringing to question the accuracy of some of the population count. While Biden has introduced policies to encourage family creation to promote population growth, it is unlikely to change the cultural trend of 1. 93 children per family in the U.S. Which brings us to a glaring issue that has plagued U.S. politics over the past 20 years, immigration reform. Why can’t we just let some more people immigrate? While we can look to immigration reform as a long-term solution to this problem, some short-term solutions are readily available.

One short term solution is to create a means to bring undocumented populations already residing in the U.S. out of hiding. Many of these populations have been even more gravely hit by the pandemic and although they have already contributed to our nation’s economy have been all but forgotten.

Another solution could be to legalize the over 400,000 TPS recipients currently living in the U.S. Many of their country designations were terminated under the previous administration, leaving them with ambiguous future in the U.S. due to ongoing litigation. TPS recipients already contribute $4.5 billion to our economy annually. Regularizing this population would be an easy fix since many of them have resided in the U.S. for decades and are integrally part of our communities. With the debate over inspection and admission brewing in the supreme Court, we often forget that we are talking about people’s lives and not just entertaining an intellectual debate about who should get the little white card in the passport indicated they arrived in the U.S. and who should not. By the way, that is just where policy should step in and define principles that reflect our values in a way that the courts cannot. People living, working and contributing to the American way of life are more important than little white cards in passports.