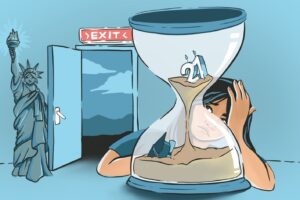 (CNN) – Most college students can’t wait for their 21st birthdays. But Lakshmi Parvathinathan is terrified.

It’s the moment when everything she’s worked for could slip away.

“All my friends excitedly talk about turning 21 — hitting the bars, all of that…but it’s just something that I dread,” she says.

The day she turns 21, Parvathinathan will no longer be protected by the work visa that allowed her parents to immigrate to the United States from India. And she may face deportation.

It’s known as “aging out,” and experts estimate that about 200,000 people like Parvathinathan are living in a similar limbo. Brought legally to the United States as children, many are scrambling to find ways to stay in the country they love. Some are forced to leave the US when they run out of options.

They’ve dubbed themselves “documented Dreamers,” and they say their plight shows how broken the US immigration system is.

Even those who immigrate legally find themselves facing roadblocks that are impossible to surmount, Dip Patel says. The 25-year-old pharmacist is the founder of Improve the Dream, a group of “documented Dreamers” pressing Congress and the Biden administration to help save their futures.

“The whole situation is something that most people don’t really know even exists,” he says, “that it’s possible for an immigrant child to be brought here legally, do all their education here, but still not have a chance to become an American.”

The issue is affecting a growing number of people, according to Julia Gelatt, a senior policy analyst at the Migration Policy Institute.

One major reason: the green card backlog is immense — especially for immigrants from India; it can take decades for them even to have a chance to apply.