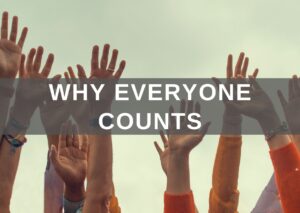 As our nation is trying to move on from the apocalyptic hardships of 2020 and from most the past 4 years, the 2020 national census debacle may prove to be the Trump administration’s far reaching hand into the future for decades of congressional power and the allocation of money in the U.S. According to the U.S. census bureau “…The goal of the 2020 Census is a complete and accurate count of everyone living in the United States and its five territories…” As the Supreme Court considers the procedural question of whether addressing the exclusion of undocumented immigrants from the 2020 census is premature, the core issue is ignored. Who is everyone?

Despite the overwhelming evidence that even the newly appointed conservative Judge Barrett opposes the Trump administration’s attempt to exclude undocumented immigrants, we still have difficulty, in this country, with identifying who counts.  It is an issue that cuts to my core as an African-American woman of immigrant descent.  Our very constitution originally only counts an African-American male as 3/5ths of a person for tax purposes.  This same constitution would not allow women to vote.  That power was originally retained only by white male landowners.  Seemingly, as a nation, we progressively began to recognize the worth of each individual.  Through the adoption of the 13th and 14th amendments, we abolished slavery and protected human life and liberty.  With the 15th amendment, we gave black men the right to vote.  This recognition of human value only lasts, until after the civil war.  In the 1880’s we started wishing certain people did not count again and instituted the Chinese Exclusion Act.  Yes, that was America’s first-ever attempt at instituting an immigration law.  Women would therefore have to wait almost 3 more decades before the 19th amendment would give them a voting voice that counts.

If in 1787 disenfranchised slaves, forcibly removed from their native lands and abducted as free labor, counted for 3/5ths of a man, why haven’t we learned by 2020 that an undocumented immigrant choosing America to flee from his native land, choosing to offer his labor counts as a whole person?  Who is everyone the 2020 Census should count?  They are our neighbors, family, and co-workers, documented or not.  They are the undocumented members of our community paying $11.6 billion in state and local taxes. Who counts?  Everyone counts.  Including every undocumented immigrant.