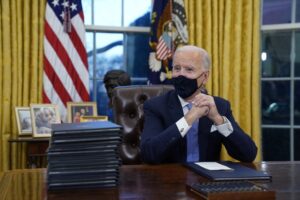 As one of his first acts, Biden offered a sweeping immigration overhaul last week that would provide a path to U.S. citizenship for the estimated 11 million people who are in the United States illegally. It would also codify provisions wiping out some of President Donald Trump’s signature hard-line policies, including trying to end existing, protected legal status for many immigrants brought to the U.S. as children and crackdowns on asylum rules.

It’s precisely the type of measure that many Latino activists have longed for, particularly after the tough approach of the Trump era. But it must compete with Biden’s other marquee legislative goals, including a $1.9 trillion plan to combat the coronavirus, an infrastructure package that promotes green energy initiatives, and a “public option” to expand health insurance.

In the best of circumstances, enacting such a broad range of legislation would be difficult. But in a narrowly divided Congress, it could be impossible. And that has Latinos, the nation’s fastest-growing voting bloc, worried that Biden and congressional leaders could cut deals that weaken the finished product too much — or fail to pass anything at all.

“This cannot be a situation where simply a visionary bill — a message bill — gets sent to Congress and nothing happens with it,” said Marielena Hincapié, executive director of the National Immigration Law Center, which advocates for low-income immigrants. “There’s an expectation that they will deliver and that there is a mandate now for Biden to be unapologetically pro-immigrant and have a political imperative to do so, and the Democrats do as well.”

If Latinos ultimately feel betrayed, the political consequences for Democrats could be long-lasting. The 2020 election provided several warning signs that, despite Democratic efforts to build a multiracial coalition, Latino support could be at risk.

By Will Weissert for THE ASSOCIATED PRESS
Read Full Article HERE