Home Economics Why Are More Immigrants Trying To Cross The U.S.-Mexico Border? Labor Shortage May Be Key 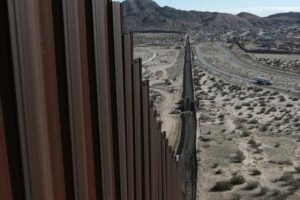 California’s labor shortage, exacerbated by the COVID-19 pandemic, is the main driver of why federal agents are encountering more unauthorized immigrants attempting to illegally cross the border from Mexico to California, according to Kevin R. Johnson, dean of the UC Davis School of Law.

Johnson, an immigration expert, attributes the influx of immigrants attempting to cross the border to the labor shortage in the U.S., particularly in the low-skill job market.

“There are jobs to be had and I don’t know if in my lifetime I’ve seen this many signs in store shop windows about hiring opportunities and employers claiming that they can’t get enough workers,” he said. “You got to think that’s going to have an impact on people making the decision whether to cross or not.”

From September 2020 to September 2021, The U.S. Border Patrol reported encountering 202,000 undocumented immigrants attempting to cross the border from Mexico to California, according to federal statistics.

California’s current unemployment rate sits at 7.5%, according to estimates from the Employment Development Department. “It doesn’t surprise me given the labor shortage in the low-skilled labor market why more people might be coming,” Johnson said.

During those 12 months, the majority of immigrants (82%) attempting to cross the border were from Mexico, according figures from the U.S. Border Patrol.

Around 4% were from Guatemala, El Salvador and Honduras. In Central America, Johnson said many are fleeing violence and poverty.

In the wake of an uptick of migrants seeking asylum in the U.S. in the spring of this year, Gov. Gavin Newsom set aside $105 million in the state budget to support migrant families at the U.S.-Mexico border to provide them shelter, food and emergency medical care.

Previously, the state announced it would spend $28 million to aid asylum seekers entering the country through California to await their immigration court dates.