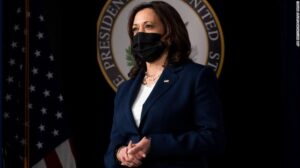 The Biden administration is considering pressing Guatemala to address governance issues in the country, ranging from investment to corruption, according to a source familiar with the deliberations at the White House, highlighting just one of the delicate negotiations Vice President Kamala Harris is expected to lead.

The State Department, in coordination with other federal agencies, is weighing a list of priorities to address irregular migration ahead of Harris’ expected visit to Guatemala. Those priorities include legislative reform designed to improve conditions in the country, bolstering border security in the region and increasing Immigration and Customs Enforcement removal flights, the source said.

It’s a high-stakes negotiation for Harris, who was tapped by President Joe Biden to lead Central American efforts against the backdrop of a growing number of migrants, many of whom are from the region, at the US southern border that have stretched the government’s resources. Harris is not expected to travel to Mexico and Guatemala until mid-May at the earliest, according to a source familiar with the planning.
“We are making progress, but let’s just be very clear, this is a complicated, complex issue that actually has been an issue for a long time and the work that we are putting into it now is work that is going to require a long-standing commitment beyond administrations,” Harris said Monday after touring a manufacturing plant in North Carolina.

Since being tapped, Harris — whose role is similar to the one Biden took under the Obama administration — has spoken with the leaders of Guatemala and Mexico and recently met with experts on the region in a virtual roundtable.

Harris was in listening and learning mode during the roundtable, according to a source with knowledge of the meeting. She asked questions but didn’t provide information on specific strategies, the source said, adding that she’s “very focused” on dealing with root causes and looking at what would provide people in the region with “hope” in the short term.