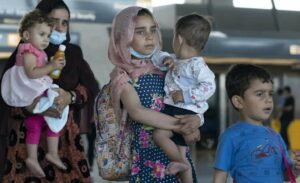 The White House is reportedly asking Congress to provide a quick pathway to permanent residency in the United States for tens of thousands of Afghans who are ineligible for visas after being evacuated and brought to the U.S. by the Biden administration this summer.

As part of a $6.4 billion emergency funding request that President Joe Biden sent Congress earlier this week, the administration wants lawmakers to include language that would allow an unspecified number of Afghan citizens the ability to apply after one year for a green card, the Wall Street Journal reported Wednesday evening.

As of this week, approximately 60,000 people have arrived in the U.S. from Afghanistan.

Although the Biden administration had planned to provide a Special Immigration Visa for Afghans who assisted the U.S. and its allies during the 20-year War on Terror, it was unable to approve most applications before withdrawing troops in August. Fewer than 800 of the 20,000 applicants were in the final stages of the application process as of August.

When Kabul was overtaken by the Taliban in August, Afghans rushed the airport in an attempt to get out of the country while U.S. troops were evacuating people who had helped the U.S. during the war. Despite Biden’s statements that the administration would rescue those who were visa recipients, the administration airlifted an additional tens of thousands of people who have not been approved for visas and are not in the process of applying for them.

Biden administration officials have defended the move as rescuing “vulnerable” people, a term Homeland Security Secretary Alejandro Mayorkas used last week. However, it now sets the U.S. up to have to decide what to do with an unprecedented influx of people who arrived in the U.S. on military planes with no personal belongings or jobs.