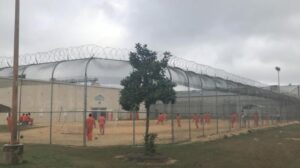 A whistleblower who previously worked at an Immigration and Customs Enforcement facility in Georgia detailed a high rate of hysterectomies and alleged medical neglect in a complaint filed to the Department of Homeland Security inspector general Monday.

Dawn Wooten, a licensed practical nurse employed by the center who’s represented by the Government Accountability Project and Project South, stated in a complaint that while some women may have required a hysterectomy, “everybody’s uterus cannot be that bad.”

The complaint, which also included a series of concerns about the facility’s handling of the coronavirus, immediately received responses from Democratic lawmakers.

“The allegations put forth in this whistleblower complaint point to an alarming pattern of unsafe conditions and a lack of oversight at privately-run ICE facilities,” said Rep. Bennie Thompson of Mississippi, chairman of the House Homeland Security Committee, in a statement, adding that allegations of hysterectomies being performed on women without consent is “incredibly disturbing.”

“Everybody he sees has a hysterectomy—just about everybody. He’s even taken out the wrong ovary on a young lady [detained immigrant woman]. She was supposed to get her left ovary removed because it had a cyst on the left ovary; he took out the right one. She was upset. She had to go back to take out the left and she wound up with a total hysterectomy,” Wooten explains in the complaint.