Home Politics While Trump Cracked Down on Immigration, a Republican Megadonor Sued for a Special Visa 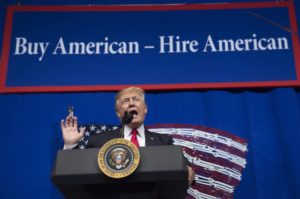 Shipping supplies billionaires Richard and Elizabeth Uihlein frequently back “America First” candidates and causes. When it comes to their own company, it’s a different matter.

As two of the most prolific political donors in the Donald Trump era, billionaires Richard and Elizabeth Uihlein have supported the president’s “America First” agenda. Elizabeth, the president of their shipping supplies company, recently wrote to customers: “Personally, I am an American first. I care about American jobs.”

But when it comes to business, their company has sought special visas for foreign workers — going so far as to sue the government to secure one at the same time federal officials implemented the president’s more stringent immigration policies.

The suit, filed February in federal district court in Illinois, came after the administration rejected the company’s 2018 petition to hire a full-time software engineer from India, court records show. The company sought a type of visa, called an H-1B, that allows foreign workers with special skills to stay in the U.S. for temporary periods.

The Uihleins back conservative candidates and groups that have advocated not only for crackdowns on illegal immigration, but also for stemming legal migration to the U.S.

In court testimony last year in an unrelated case in Texas, Richard Uihlein, who is the company’s CEO, was asked if his contributions to a group that supports conservative representatives were meant to aid not just immigration reform but a tougher immigration policy. Uihlein responded: “I would say that’s correct, yep.”