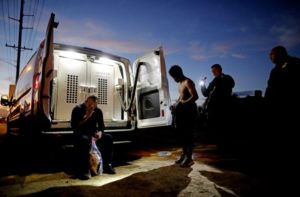 Immigration has been a hallmark issue for President Trump since the day he announced his bid for office in 2015, and it continues to animate his base of supporters. It has also been a primary source of conflict with Democrats, with issues such as the Muslim travel plan, the fate of “Dreamers” and family separation at the border leading to pitched legal battles.

The 2020 Democratic candidates are vocally united in opposition to the president’s immigration rhetoric and have pledged to overturn his administration’s policies, with Congress or through executive order. They agree on the broad strokes of immigration reform, such as creating a path to citizenship for people in the country illegally, ending family separations at the U.S.-Mexico border and increasing foreign aid to Central America to reduce root causes for the flow of asylum seekers.

But there are some policy differences, including whether unauthorized border crossings should be decriminalized and what compromises candidates would be willing to make to expedite a path to citizenship for Dreamers, young immigrants brought to the country illegally as children.

Here is where the seven candidates who qualified for the December Democratic debate stand on immigration issues:

Former Vice President Joe Biden has said the nation’s immigration system is broken but can be fixed without sacrificing America’s values.

He supports providing healthcare and creating a pathway to citizenship for all who are in the country illegally and increasing the annual cap on refugees allowed into the United States to 125,000. He proposes allowing local governments to petition for new immigration visas to support economic growth if there are not enough local workers to fill jobs.

Biden is a vocal critic of Trump’s call to add to the border wall, but as a senator representing Delaware he voted to fund wall construction, and last year, he said he would support some new funding as part of a deal to provide citizenship to Dreamers.