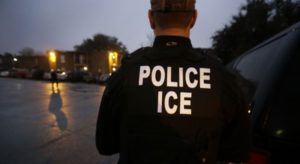 “You should be uncomfortable. You should look over your shoulder,” Thomas Homan, the acting director of Immigration and Customs Enforcement (ICE), said during a hearing before Congress in June 2017. “You need to be worried. No population is off the table.” The administration was making it clear that its crackdown on undocumented immigrants was coming. A knock on the door could mean deportation. For the past two and a half years, during Trump’s presidency, many immigrant families have been living in an atmosphere of fear and tension.

That was the feeling going into last weekend, when the news spread that the Trump administration was once again planning a wave of raids at the homes of immigrants across the country. ICE agents would be storming the homes of undocumented immigrant parents and children over the weekend. The plan, which had originally been slated to begin in late June, had been delayed for two weeks, and families, alongside the activists who were advocating for them, were on high alert.

The raids did not occur at the scale expected, several immigrant-rights advocates told me. Instead, the administration now says it plans to carry out several smaller-scale raids over the next week. But a few attempts did occur, The New York Times reported. One teenager in New Jersey was reportedly awakened at 1 a.m. on Sunday by what appeared to be ICE agents asking her to open the door. She did not let them in. They returned hours later with flashlights and banged on the door. She went upstairs to where her parents were; the agents left once again. The Trump administration had planned its predawn immigration raids for Sunday, when residents would most likely be at home and arrests could be carried out.

Such efforts are part of a significant shift that has taken place over the past several years: ICE agents, once heavily focused on workplaces as the targets of their raids, have been turning to people’s homes as a place to find and detain them. According to a report from the Immigrant Defense Project, a nonprofit immigrant-rights advocacy group, over the past two years there has been an increase in arrests “in which ICE agents enter homes by use of coercive means, including physically forcing their way inside, holding up their guns, and threatening to arrest everyone in the home.”

By Adam Harris for THE ATLANTIC
Read Full Article HERE