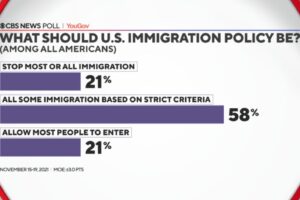 Few issues spark debate more than immigration, because people connect it to so many aspects of society: from economics and culture, to law and resources, as well as to what one believes about people who are immigrating in the first place.

So considering all that, what do people want U.S. policy generally to be right now? Let’s look at what’s behind each of three broad views: those who say they’d stop most or all immigration now (this group is one in five Americans — 21%); those who would allow some immigration, based on strict criteria (this is by far the largest of three, a majority 58% of Americans, though exactly what that criteria ought to be is itself a matter for discussion, which we’ll cover below); and those who would allow a lot of immigration, including for most or all who want to enter the U.S. (this is another 21%, counterbalancing the most restrictive group.)

The people giving these responses differ somewhat in how they see both immigrants and immigration’s impact — here’s more on each:

The largest group of Americans, those who say they would allow some immigration, starts with a mainly positive impression of who immigrants are, at least in one sense: about eight in 10 of them see immigrants as generally hard-working, and most say they’re part of what “makes America special.” In terms of economic impact, most say immigrants “fill jobs Americans won’t do,” but for these respondents, it’s not all clear-cut. A sizable four in 10 also feel they have the effect of taking wages away from U.S. citizens. There are still nearly half of them who say that some immigrants are looking for “handouts and welfare.”

So within this “some immigration” group, there’s a host of criteria that these Americans use as priorities for allowing immigrants, including those who already have family in the U.S., those fleeing persecution and those with special work skills.