Home Resources What Martha’s Vineyard Tells Us About Immigration 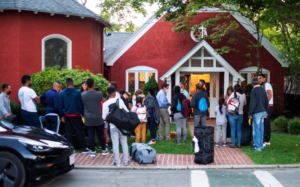 Florida Gov. Ron DeSantis’ move to send two planes carrying migrants to Martha’s Vineyard on Wednesday night is not the first to bring the nation’s immigration battles to the elite summer destination.

Daniela Gerson – Mel Melcon/Los Angeles Times/Los Angeles Times
That island off the coast of Massachusetts is more accustomed than many places in the United States to welcoming an influx of South Americans. Not Venezuelans, but Brazilians. And not asylum-seekers lacking connections dropped from the sky, but labor migrants who follow friends and family across multiple countries.

Indeed, for decades Martha’s Vineyard has been a microcosm of much of our national hypocrisy with regard to immigration laws – violations that cross party lines. It’s also been a story of what immigrants contribute to communities when provided an opportunity.

The descent into cruel political stunts distracts from how our broken immigration system is not a partisan problem. It’s an American one. And one that Congress has failed to act on for decades.

Our laws reflect neither the reality of our labor needs nor our humanitarian aspirations. Dumping asylum-seekers on an island they did not choose to go to and that is unprepared for their arrival is not only cruel, it also distracts from the hard work of finding a solution to a broader patchwork system overrun with problems.

Thirteen years ago, I wrote an article for the Financial Times, “How migration transformed Martha’s Vineyard.” Replacing the mostly white college students who used to paint houses, make beds and party, thousands of Brazilians began arriving in the 1990s, prepared to work harder and reliably show up in the morning. By 2007, about 1 out of 3 children born on the island had a Brazilian mother, according to Massachusetts health data.

I traced the island’s booming Brazilian population to one man, Lyndon Johnson Pereira. In 1986, he left behind a small rural town in the Brazilian state of Minas Gerais and found a job washing dishes at a bakery in Boston.