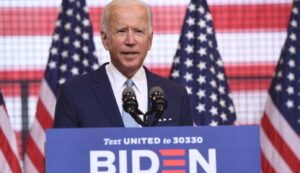 After the opening speakers had warmed up the virtual audience, a blue-suited Joe Biden appeared on the live stream with a bookshelf in the background and made what sounded like a campaign pitch to Indians and Indian Americans.

“I know it is hard,” he said in the message on India’s Independence Day. “My heart goes out to all those of you who have been the targets in the rise in hate crimes, the crackdown on legal immigration, including the sudden and harmful actions on H-1B visas that for decades have made America stronger… We will overcome and build back better than ever.”

For the Democratic presidential candidate, as for President Donald Trump, Indian Americans are an important political bloc. In addition to making the right noises on the campaign trail, Biden has released a policy document – reportedly the first-ever by a presidential candidate – aimed exclusively at Indians. Among other things, it mentions his plans to reform the H-1B visa system, increase the number of visas, and eliminate “the limits on employment-based green cards by country, which have kept so many Indian families in waiting for too long”.

These are important proposals. But immigration lawyers interviewed by Scroll.in expressed both misgivings and optimism about what Biden’s presidency could hold. On the whole, though, they believe Biden would be good for Indian immigration to the US, which has begun to sputter in the last few months.

“Joe Biden has made it crystal clear that he is going to turn the clock back and eliminate the anti-immigration proclamations/executive orders put in place by [Donald] Trump,” said Sheela Murthy, founder and president of Maryland-based Murthy Law Firm, one of the largest immigration firms in the US that has been helping immigrants since at least 1994.

The fact that Joe Biden has recognised America as a nation of immigrants is “music to the ears of immigration lawyers like myself,” said Murthy.