Home Federal Enforcement What is Title 42 And What Does Its End Mean For US Border Immigration? 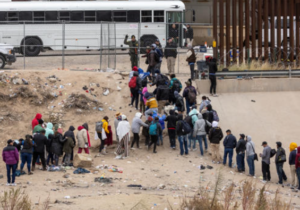 Title 42 is making headlines everyday, but the arcane law has left many people confused about what exactly it is, why it’s ending on Dec. 21, and what will happen when it goes away.

Here’s a breakdown to help you sort through all the news — and the noise.

What is Title 42?
Title 42 is a law currently enforced by Border Patrol that gives the government power to stop people entering the US in order to keep diseases out of the country.

President Donald Trump invoked the law at the beginning of the COVID-19 pandemic, which allowed the US to expel some migrants who had crossed the border illegally.

During the Trump administration Title 42 was used to indiscriminately block migrants seeking asylum — which caused many immigrant rights groups to sound the alarm and challenge it in court.

Immigrants seeking asylum turn themselves in to U.S. Border Patrol agents after wading across the Rio Grande to El Paso, Texas on December 18.Getty Images What has happened with Title 42 under Biden?
When Biden assumed the presidency, he continued to enforce Title 42 with one important change from his predecessor. Biden said Border Patrol agents were only allowed to expel migrants from certain “non-asylum countries” under his direction. That meant migrants seeking asylum from countries like Colombia, Venezuela, Peru, Cuba and Nicaragua who entered the country could still seek asylum and stay while their case is adjudicated — unless they had a criminal record.

Still, there was never a defined set of countries that qualified as “non-asylum countries”. The Biden Administration can add or change the list at any point, which makes enforcing Title 42 complicated for Border Patrol agents. One day, citizens of a country could be classified as asylum seekers and allowed into the US, the next they could be subject to removal under Title 42.