Home Resources What Biden’s win changes for Americans, China, and the environment 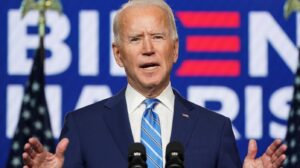 Americans who cast their ballots for Democratic presidential candidate Joe Biden did so for varying reasons. Some were simply fed up with the current White House occupant; others were concerned for the fate of democracy itself, and still others were channeling a more hopeful view of the future.

Either way, the defeat of Donald Trump promises a wave of policy rollbacks and reversals by the former US vice president and Delaware senator.

Having averted another four years of Trump’s restrictive immigration policies, destructive environmental choices, and isolationist approaches to matters of global concern, America now has a chance to restore trust in the United States and its institutions. But first it must tame an out-of-control virus and come up with enough federal aid to prevent a double-dip recession.

What can Americans, and the world, expect from a Biden administration?

During a campaign marked by the Covid-19 pandemic, Biden positioned himself as the pro-science choice. He expressed his support for investment in research and in public health agencies, garnering endorsements from science-focused organizations that rarely weigh in on such matters, such as Scientific American and Nature.

Biden’s Covid-19 science-backed policy reflects his willingness to listen to experts. With many fearing US cases will rise further this winter, Biden has called for a national mask mandate, as well as widespread testing. He also has called for daily Covid-19 briefings and an effort to end the plague of misinformation stymying efforts to keep the virus at bay.

In short, Biden would offer national guidelines to combat the virus, something that many experts say has been missing since the pandemic began.

After four years of war on immigrants—whether with legal status or undocumented—under Trump, Biden will have a lot to do (and undo) when it comes to immigration.