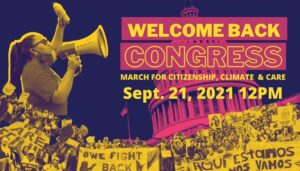 Welcome back Congress, it’s time to get things done.

On Tuesday, Sept.21, Congress returned from their recess, and thousands of immigrants, allies, and community members from across the country marched to the U.S Capitol to demand that Congress ensure a pathway to citizenship in the reconciliation budget package.

The “Welcome Back Congress” march, organized by the grassroots immigrant advocacy organization, officially began on Tuesday morning, as a sea of protesters chanted “Congreso, escucha, estamos en la lucha,” (Congress, listen, we are in the fight), with each repetition growing louder.

On Sunday, Senate Parliamentarian Elizabeth MacDonough ruled that existing budget rules prevent the inclusion of a pathway to citizenship in the reconciliation package. ]

Illinois Rep. Jesús García addressed the crowd, insisting that this is not the time to be discouraged and give up.

“We’ve been here before. We’ve got to keep on fighting like hell for our families, friends and neighbors, and we can’t stop until we get a ‘yes,’” García said.

The march began at Banneker Park and the crowd formed a column as wide as the street on Maine Avenue. Groups from over 20 states, as far away as Oregon, created a patchwork of color with their shirts. Glimmers of red, yellow and blue divided the crowd, and the U.S flag flew next to that of Mexico, alongside posters in English, Spanish and other languages.

One sign read, “I should be in class right now, but I have to fight for my rights.”

The demonstrators paused in the tunnel under 1-395, coming together in a powerfully unified voice, chanting “sí se puede” (yes we can.) After emerging from the tunnel, the crowd stopped in front of the Immigration and Customs Enforcement (ICE) headquarters.