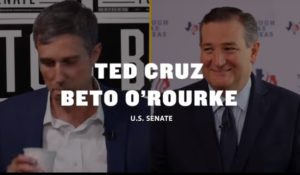 About the only thing U.S. Sen. Ted Cruz and U.S. Rep. Beto O’Rourke have in common is how long they’ve served Texans in Washington. Both first got elected to Congress in 2012. Six years later, Cruz, a Republican, is up for re-election and O’Rourke, an El Paso Democrat, is vying to unseat him.

In the latest video in our Split Decision series, watch the two men battle it out in one of the most closely watched races in the country. They offer their starkly different views on the government’s role in health care, on the best ways to reduce gun violence and how to deal with immigrant families who enter the country illegally. We also asked them both if they’ll commit to serving a full six-year-term if they win, about their chances of running for president in 2020 and what advice they’d give to their younger selves.

The Tribune interviewed Cruz on Sept. 11 and O’Rourke on Sept. 19. (Libertarian Neal Dikeman is also on the ballot.) Watch Cruz and O’Rourke virtually debate the issues ahead of their second televised debate, scheduled for Sunday in Houston.