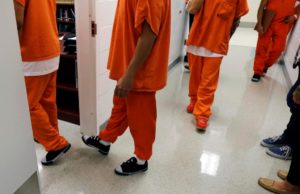 On a recent Saturday, immigration advocates packed Washington Hall, shared tamales and discussed the various ways they planned to put an end to immgiration detention in Washington state.

They had already managed to stop deportation flights in King County, the activists boasted.

After giving a brief historical overview of the burgeoning private prison industry in the United States (the first private prison opened in the 1980s), and the costs and abuses associated with the facilities, the activists revealed a bill a number of groups have been working on with Washington state legislators. The bill’s intention: Ban all private detention facilities. The Latino Civic Alliance, Washington State Labor Council, American Civil Liberties Union of Washington, Northwest Immigrant Rights Project, La Resistencia, among others, have supported the bill.

Sponsored by state Sen. Rebecca Saldaña, D-Seattle, and in the House, Lillian Ortiz-Self, D-Mukilteo, the bill aims to prevent private companies that contract with local, state and federal agencies, such as U.S. Immigration and Customs Enforcement, or ICE, from operating in Washington state.

Under the bill, Washington state’s one private detention facility, the Northwest ICE Processing Center in Tacoma, would continue to detain people only for the duration of its contract, which expires in 2025. The bill could prevent other private facilities — whether criminal or civil — from opening.

Leading presidential candidates, such as Sens. Bernie Sanders and Elizabeth Warren, have already identified the private prison industry as a primary target, vowing to do away with private jails.

Grisel Ruiz, supervising attorney at the Immigrant Legal Resource Center, one of the groups behind the push to ban private prisons, said “this really is a national movement.”