Home Politics Warren Says All Democrats On Board With ‘Comprehensive’ Immigration Reform: ‘We Have to Work Out the Details’ 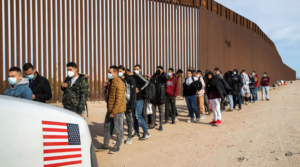 Sen. Elizabeth Warren, D-Mass., said that all Democrats supported “comprehensive immigration reform” and that they were still working out the details in a CNN interview Monday.

During an appearance on CNN’s “State of the Union,” host Dana Bash asked Warren about Title 42 and her colleagues that have come out against the administration’s move to lift it.

“Almost a dozen of your fellow Democratic senators are expressing concerns about this. You support lifting title 42, so what is your plan to handle a likely surge in migrants? And are you confident they will be treated humanely?” Bash asked the senator.

Warren said that Title 42 was not “consistent with our values” and “doesn’t keep us safer.”

“The Biden Administration is putting plans in place to deal with people who are asking for amnesty and humanitarian relief at the border,” the senator said. “But keep in mind, we need comprehensive immigration reform. And that’s something all the Democrats are on board for. We have to work out the details. We still need to be in that fight, though. That’s where we need to make significant change.”

Bash also asked Warren about the midterm elections and the Democratic Party’s chances.

Warren said that if the Democrats don’t pass their agenda in the next 200 days, they would lose big in the November midterm elections.

Others, like Rep. Susie Lee, D-Nevada, emphasized having a plan in place before the measure is lifted.

“Until the administration can demonstrate that there is a plan in place to handle a surge in migration at the border in a humane, safe and orderly way, I can’t support the decision to end Title 42 at this time,” Lee previously told Fox News Digital.