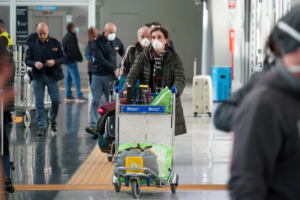 President Trump initially kept reasonable travel restrictions to prevent the spread of the coronavirus, but with the virus spreading inside the United States, he is already shifting from minimizing its threat — his first instinct — to use it to justify restrictive immigration policies that he wanted anyway. A broader move to general nativism at this time would be disastrous, as so many immigrants are leading the U.S. response to the virus.

A new analysis of government data from the Cato Institute shows that eight of the major companies developing treatments and vaccines for the virus are heavily reliant on foreign workers. From 2010 to 2019, we found that the Department of Labor approved the companies developing treatments or vaccines for coronavirus to hire more than 11,000 immigrants and H-1B high skilled foreign workers.

Among these hires were 3,310 foreign biochemists, biophysicists, chemists, and other scientists on H-1B visas. They had brought in thousands of statisticians to analyze data and software, database, and computer engineers to support them. Without these workers, America’s hope of treating and saving thousands of lives at risk from the coronavirus would greatly diminish.

Pharmaceutical companies rely on foreign workers
Gilead Sciences, for example, has developed a leading candidate to treat the disease, which is in ongoing clinical trials. It received approvals for more than 300 biochemists, biophysicists, and other biological scientists last year alone. Sanofi, which is working with the U.S. government’s Biomedical Advanced Research and Development Authority on a vaccine, relies on dozens of H-1B workers on its research team. Sanofi even hired its chief medical officer on an H-1B visa in 2010.

Moderna Therapeutics, which has the first vaccine to reach Phase 1 trials in the United States, obtained H-1B approvals for 18 biological technicians, biochemists, biophysicists or biomedical engineers in 2019 alone.

This shouldn’t be a surprise. We’ve known for years that many of the top drug researchers in America are foreign-born. A 2013 report from the Partnership for a New American Economy found that at the top 10-patent producing U.S. universities, 79 percent of drug or drug compound patents had a foreign-born inventor. In molecular biology and microbiology the share was 75 percent.