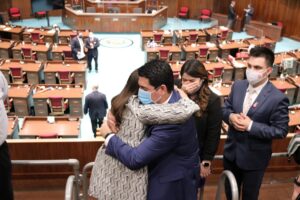 Moments after a bipartisan vote at the House of Representatives passed a measure to ask state voters to repeal a 2006 ban on in-state tuition for undocumented immigrant students in Arizona, Reyna Montoya and Jose Patiño were in disbelief.

Patiño and Montoya were both high school students when 71% of Arizona voters in 2006 told youth like them and families like theirs could not access state public programs like in-state tuition and financial aid, child care assistance and adult literacy classes.

For Patiño, who was attending Carl Hayden High School at the time, the message was that he wasn’t worth educating.

On Monday afternoon from the House gallery, the two immigrant leaders overlooked the floor where 29 Democrats and four Republicans had just voted in favor of Senate Concurrent Resolution 1044, which will give voters next year an opportunity to repeal parts of that 2006 law.

“I dreamt about this moment for years,” Patiño said just moments after the 33-27 vote concluded. “To me this is a vindication of the work that has been done for a lot of years for a lot of people.”

SCR1044 will ask Arizona voters to weigh in on a ballot measure to allow all students who attend an Arizona high school for two years and who graduate to be eligible for in-state tuition. It will also exempt postsecondary education from the definition of a state or local public benefit, which those without lawful immigration status can’t currently access.