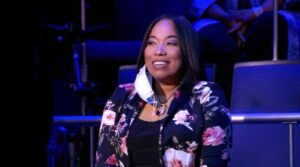 Flor Cruceta, an immigrant from the Dominican Republic who recently became a United States citizen, had an odd exchange with President Donald Trump at ABC News’ town hall Tuesday.

Cruceta asked the president a question on behalf of her mother, who recently died from breast cancer which had spread to other areas of her body. She asked Trump what he would to do allow more immigrants to become full U.S. citizens.

But Trump answered her question — about immigration — by talking, instead, about the coronavirus crisis, appearing to misunderstand the cause of her mother’s death, likening it to the pandemic which has killed nearly 200,000 Americans.

“He started talking about immigration and then he completely switched to COVID. I understand that that is the situation we are living right now, the pandemic, but I did not say that my mom died from the coronavirus. So, I didn’t know if he misunderstood me or he really changed my question to his benefit,” she said.

Cruceta said she wanted to correct the president, but couldn’t get the words out because she was crying “too much.”

“It’s not that it was inappropriate,” Cruceta said of correcting Trump. “It’s just that I’m in pain. I tried to speak.”

Cruceta’s family came to the U.S. from the Dominican Republic in 2006. Her mother worked at a meatpacking plant “for many years,” she said. “If she got sick, she never went to the doctor. She didn’t want to stop working.”

Cruceta began her question to Trump by describing her mother.

“She had breast cancer, but it made metastasis on her brain, bone and lungs,” Cruceta told the president, holding back tears. “She passed on the 19th. One of her biggest dreams was to become a citizen to vote.