Home Politics Visa Program Not Enough To Save Lives Of Those Who Helped US Troops In Afghanistan, Advocates Say 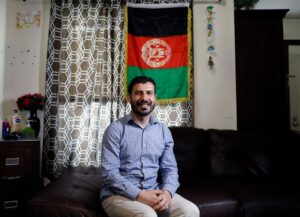 Shamsurahman Zaland feels very lucky to be living in the United States.

In his home country of Afghanistan — where he helped the U.S. mission through his work for the United States Agency for International Development (USAID) — he frequently received death threats from insurgent groups such as the Taliban.

Now, living in Dublin, Zaland believes the United States government has an obligation to the people who have worked for it in Afghanistan — and that they should fulfill it sooner than later.

He’s not the only one.

Advocates and lawmakers are sounding the alarm, saying that Afghans who helped the U.S. mission in the country are in danger and at risk of not getting to safety before U.S. troops pull out after an almost 20-year presence. That’s currently scheduled to happen by Sept. 11, 2021.

The visa program that brought Zaland and his family to the United States is backlogged and can take an average of two to three years from beginning to end to come through. That’s time advocates say Afghans don’t have.

“This is a life or death situation,” Rick “Ozzie” Nelson, an Afghanistan war veteran, said during a Thursday press call for the National Immigration Forum, an immigrant advocacy organization

Nelson — a former U.S. Navy helicopter pilot and the former director of the office of combating terrorism at the National Security Council for former President George W. Bush — talked of the importance of getting people out of the country safely. He and others also called for an evacuation of Afghan people who helped the United States and thus are in danger.