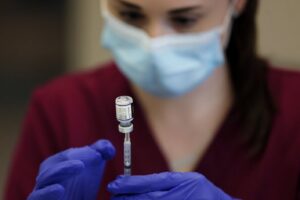 Observers say they’ve started to see progress on efforts to streamline the immigration visa process to allow more internationally trained health professionals to work in the U.S. and help address widespread nursing shortages amid the COVID-19 pandemic. But they also say more needs to be done.

The pandemic has slowed the pace at which U.S. officials have conducted interviews with visa seekers, which is one of the final steps needed to gain permanent residency. As of November, only 28,964 out of more than 490,000 qualified immigrant visa applicants were scheduled for interview, according to figures from the Department of State’s Bureau of Consular Affairs.

An estimated 10,000 foreign-trained nurses have been on the waiting list for an interview, with the average wait time anywhere from 12 to 18 months, according to Sinead Carbery, brand president of O’Grady Peyton International, the international division of leading health care staffing recruitment firm AMN Healthcare.

Carbery and others contend a contributing factor to the delays in processing immigration visas for nurses has been a four-tier system the U.S. Department of State established late last year to prioritize cases. While the system was intended to work through the backlog by granting higher priority to petitions filed by immediate family members, for example, it placed employment-based visa petitions, which includes visas sought by health care professionals, among the last in line to be processed.

“These health care workers already have an employer that needs them who is ready to hire them as soon as they enter into the U.S.,” says Sherry Neal, an immigration attorney with the law firm Hammond Neal Moore in Cincinnati. Neal says nurses waiting for visa interviews have already been matched with an employer, and have met both nurse licensing and English-language proficiency requirements.