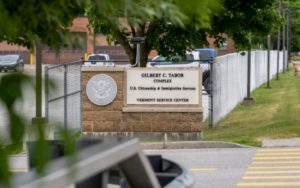 More than 1,500 Vermont employees of U.S. Citizenship and Immigration Services are expected to receive notice of a potential furlough, due to the agency’s budgetary crisis.

According to an agency spokesperson, on or before July 2 approximately 13,400 USCIS employees will receive notice that without a bailout from Congress, they will be furloughed as of Aug. 3.

“Though we continue to have productive conversations with Congress, we want employees who may be furloughed to have sufficient time to prepare,” according to the spokesperson. “Further, we are legally required to provide employees with advance written notice at least 30 calendar days prior to the effective date of an expected furlough.”

Vermont is home to one of five USCIS service centers that are responsible for processing millions of citizenship applications, according to a 2017 report to Congress. The agency employs people primarily in St. Albans and Essex.

In Washington, Vermont Sen. Patrick Leahy, the Senate Appropriations Committee vice chairman, has called on Senate Majority Leader Mitch McConnell and President Donald Trump to take up the issue and pass emergency funding, according to a statement issued Monday by Leahy’s office.

In a letter sent to the White House June 23, Leahy said that despite repeated calls from Democrats for more financial relief, they requests have landed on deaf ears.

“Majority Leader Mitch McConnell has publicly stated that he and the White House want to take a ‘pause’ before considering any further emergency legislation related to Covid-19, and has given no indication when that pause would end,” Leahy said. “This is irresponsible. Taking a ‘wait and see’ approach will only exacerbate the devastating effects of this pandemic, hurt the American people, and weaken our economy.”

Leahy is slated to take the Senate floor Tuesday to speak further on the issue.

At a press conference Monday, Gov. Phil Scott said that although he’s tried to find out more since he first heard about the potential cuts, the local impact is still unknown.