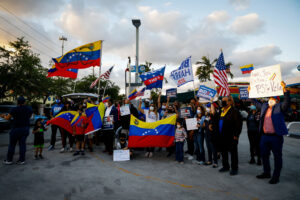 MIAMI — A poll of Venezuelan Americans in Florida, a group with growing political influence that helped former President Donald Trump carry the state, shows there is potential for them to warm up to Democrats in the future.

Almost half of all Venezuelans polled (49 percent) said they would no longer support the state’s two U.S. senators, Marco Rubio and Rick Scott, both Republicans, if they oppose granting permanent legal status to Venezuelan Americans who currently have temporary protected status, or TPS.

The poll was commissioned by the Venezuelan American Alliance, the Immigration Partnership and Coalition Fund and the Florida chapter of the American Business Immigration Coalition, all bipartisan groups that have been pushing for TPS holders to be granted permanent legal status and have been taking aim at Rubio and Scott to back specific bills to make it happen.

“Including immigration is so relevant for an economic recovery and for the growth of the country,” said Maria Antonieta Díaz, founder of the Venezuelan American Alliance. She said the poll proves that support among Venezuelans for Scott and Rubio will dwindle if they don’t support permanent legal status for TPS holders.

“Immigration is a topic that unites us despite any partisan sympathy,” said Díaz. “We are all impacted by the topic of immigration.”

“It shows that those who are registered to vote are the ones who have already solved their immigration problem,” said Eduardo Gamarra, the founder of Integrated Communications & Research, which conducted the poll, and a professor of political science at Florida International University. “It looks like those who are not registered to vote lean Democratic.”