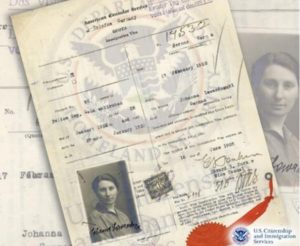 What are Visa Files?

Visa Files are the official arrival records of immigrants admitted for permanent residence between July 1, 1924, and March 31, 1944. The photograph, large amounts of biographical information, and attached vital records make Visa Files among the most valuable immigration records for genealogical research.

The Immigration Act of 1924 took effect on July 1, 1924. That law required all arriving non-citizens to present a visa when applying for admission to the United States. Immigrants requested visas at U.S. Embassies and Consulates abroad before their departure. The State Department only issued visa documents to approved immigrants and the Immigration Service only admitted immigrants arriving with a visa. In this way, visas allowed the Federal government to both select and limit the number of immigrants legally admitted for permanent residence.

Upon arrival, Immigrant Inspectors at the ports of entry collected “visa packets” from non-citizens and handled them in one of two ways:

Non-Immigrant (visitor) visas remained at the ports of entry; these temporary records were later destroyed. (Passenger lists and border port manifests remained the official record of non-immigrant admissions).
Immigrant (i.e., permanent admission) visas went to the Central Office in Washington D.C. for filing. The Central Office stamped each with a unique Visa File number, and arranged the visas by date and port of arrival. Visas were indexed by name, date of birth, and place of birth.
Between July 1, 1924 and March 31, 1944, Visa Files served as immigrants’ official arrival records. The Immigration Service used its Visa Files on a daily basis for verification of lawful admission for naturalization and other purposes. Beginning April 1, 1944, all new visas were filed in Alien Files (“A-Files”) and the Visa Files series closed. The Immigration and Naturalization Service (“INS”) retired the Visa Files series to storage in 1952.

Today the Visa Files record series consists of more than 3.1 million paper files filling nearly 7,000 boxes. USCIS routinely retrieves Visa Files from storage in response to applications for naturalization or other benefits and Freedom of Information Act and Genealogy requests.

Researchers should note that an immigrant’s Visa File may have been removed from the series and placed inside a consolidated A-File or Certificate File (“C-File”) if his or her case re-opened after April 1, 1944. If that file consolidation occurred between 1944 and 1975, the index will only refer to the A-File or C-File. If the consolidation took place after 1975, the Genealogy will perform additional steps to identify the file containing the visa packet.