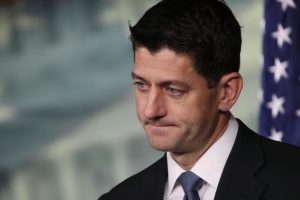 U.S. Citizenship and Immigration Services (USCIS) acting Director Ken Cuccinelli blamed Ryan for not ensuring passage of a bill sponsored by now-former Rep. Bob Goodlatte (R-Va.) that would have significantly curtailed legal immigration while granting temporary relief from deportation to so-called Dreamers, immigrants who came to the country illegally as minors.

ADVERTISEMENT
“And let’s not forget to be bipartisan in our criticism,” Cuccinelli said during a panel discussion at the Texas Public Policy Foundation, a conservative think tank.

“When Paul Ryan was the Speaker, Paul Ryan submarined the best opportunity we had legislatively with the Goodlatte bill, which in the Judiciary Committee came through. And not enough people will challenge their own leadership in the GOP to beat them down when they are wrong,” Cuccinelli said.

The House rejected the Goodlatte measure in June 2018, with 41 Republicans joining Democrats in voting against the legislation.

GOP leadership, under Ryan at the time, instead put its weight behind a compromise bill that would have granted a path to citizenship for Dreamers. That measure failed to garner support from Democrats, as it included many of the provisions from the Goodlatte bill, which would have significantly altered the country’s legal immigration system.

While immigration hard-liners backed the Goodlatte bill, it was opposed by many Republican moderates. Even if the House had passed the measure, it almost certainly would have failed to meet the necessary 60-vote threshold needed to advance in the Senate.

Cuccinelli said the opposition from moderates can be traced back to the business community.

“We had leadership there that defended the status quo,” said Cuccinelli. “They were the Chamber of Commerce Congress.”

“They wanted illegal immigration — and this is not just left and right, there’s plenty of people who are often associated with the right, although I don’t know what the Chamber of Commerce is,” he added.