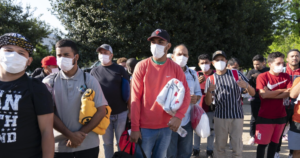 More people in the United States want to see a decreased level of immigration than a higher one, a first since 2014, according to a new poll.

The poll was conducted from July 5 to July 26 and surveyed a total of 1,013 random adults 18 and older living in any of the 50 U.S. states. The margin of sampling error for the poll is plus or minus 4 percentage points at the 95% confidence level.

Support for increased immigration peaked at 34% in May 2020, decreasing only 1% in June 2021. In the same two-year period, the desire to see immigration decrease has gone from its all-time low of 28% to increasing to 38%, according to the poll.

Around 70% believe immigration is beneficial for the U.S., while 24% say it is bad for the country, the survey showed. The 70% seeing immigration as a benefit is the lowest it has been since 2014, when the percentage of people with this belief was at 63%.

The preference for decreased immigration was highest at 65% in 1993 and 1995, when then-President Bill Clinton was pushing for strengthening border control and curtailing the hiring of migrants who entered the U.S. illegally. After dropping to 38% by 2000, the preference for less immigration surged to 58% in October 2001, a month after the Sept. 11, 2001, terrorist attacks .

On Monday, the Biden administration suspended the Trump-era “Remain in Mexico” immigration policy following a ruling by a U.S. district court judge. The Department of Homeland Security said it would no longer enroll migrants in the policy, known as the Migrant Protection Protocols, adding that all people in the protocols in Mexico will be disenrolled when they return to the U.S. for their next scheduled court dates.