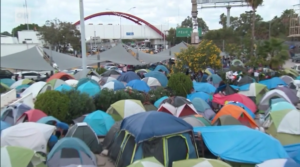 Washington (CNN)-The Supreme Court said on Wednesday that the controversial Trump administration “Remain in Mexico” asylum policy can stay in effect while legal challenges play out.

The court’s order is a victory for the administration, which warned there would be a “rush to the border” if the policy that has been in effect for a year was blocked by the courts. It’s a devastating loss for immigrant rights groups who say asylum seekers sent back to Mexico are living in dangerous conditions.
Justice Sonia Sotomayor would have denied the government’s application, the court said.
The policy, officially known as Migrant Protection Protocols, mandates that non-Mexican asylum return to Mexico as they await hearings in the United States. It has resulted in the creation of makeshift camps where hundreds of migrants have waited for weeks, if not months, in squalid and unsafe conditions. In some cases, migrant families have opted to send children across the US-Mexico border alone.
Lawyers for the asylum seekers called the government’s policy illegal and said that in the months that it has been in effect “reports of murder, rape, torture kidnapping, and other violent assaults against returned asylum seekers have climbed.”

The 9th US Circuit Court of Appeals blocked the policy last month, but allowed it to remain in effect just long enough for the Supreme Court to consider whether to step in.
“Uncontested evidence in the record establishes that non-Mexicans returned to Mexico,” under the program, the appeals court held, will “risk substantial harm, even death, while they await adjudication of their applications for asylum.”
In court papers, Solicitor General Noel Francisco argued for the Trump administration that the policy has “dramatically curtailed the number of aliens approaching or attempting to cross the border” and noted that it has “enabled the temporary return of over 60,000.”
After the appeals court blocked the policy last week, but before it issued a temporary stay of its own order, the administration argued that the ruling had created “chaos” at the US-Mexico border.