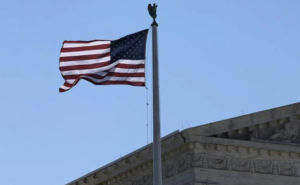 Washington: The US Supreme Court on Thursday gave the administration of President Joe Biden the green light to end the so-called Remain in Mexico policy instituted by Donald Trump as part of his hardline approach to immigration.
Under the policy, some non-Mexicans who entered the United States illegally across the southern border were sent back to Mexico to wait while their immigration cases played out in court, rather than being detained or provisionally released.

Since the beginning of his term, Biden has been trying to wind down the policy as part of what he claims is a more humane take on immigration.

Advocates for migrants said the policy exposed asylum-seekers to dangerous conditions in Mexico as overwhelmed US courts slowly work through a backlog of cases.

Thursday’s ruling in favor of the Biden administration was split 5-4, with Chief Justice John Roberts joining fellow conservative Brett Kavanaugh and the court’s three liberal justices in the majority.

Roberts, who authored the majority opinion, argued that federal immigration law allows the executive branch to return asylum seekers to Mexico, but does not force it to do so.

Biden’s attempt to terminate the policy, instituted by Trump in 2019, was challenged by a group of Republican-governed states led by Texas.

These states argued that his move violated US immigration law by forcing authorities to release migrants they had detained onto US territory. They also said that Biden officials had not followed proper administrative procedure.

A lower court in August 2021 ruled against the Biden administration and the case eventually ended up before the nation’s highest court.

At first, the Supreme Court simply refused to freeze the lower court ruling, forcing the administration to restart the policy, formally called Migration Protection Protocols (MPP), while it pressed ahead with its appeal.