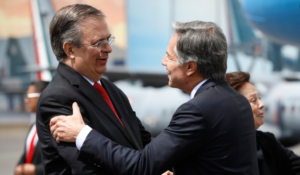 WASHINGTON — U.S. Secretary of State Antony Blinken met with Mexican President Andres Manuel López Obrador on Monday to repair relations between the two neighboring countries that have frayed over immigration and other issues.

“We discussed shared efforts to address irregular migration in the Americas, including through humane border management policies and through expanding legal pathways,” said Blinken during a press conference.

“We addressed the root causes of migration, something that Mexico and the United States are collaborating on in ways that we’ve not seen before,” added Blinken, who spoke alongside senior Mexican officials.

Mexico is consistently among the United States’ top three trading partners. Before the coronavirus pandemic, Mexico was the U.S.’s second-largest export market in 2020.

U.S. officials say the influx of illegal immigrants who cross the U.S.-Mexico border have created strains in the United States. In recent months, the state of Texas has sent thousands of migrants by bus to New York and Washington, saying the move was needed to relieve overwhelmed border communities.

The United States and Mexico are also at odds over energy policy. The U.S. has questioned the Mexican government’s support for its own state-controlled energy companies, saying it violates a trade pact and restricts American firms’ ability to compete in Mexico.

On Monday, López Obrador welcomed Washington’s “tone” over the disputes on Mexico’s energy policy during a separate news conference.

“There’s a different tone. There’s a respectful attitude,” said the Mexican president. “It’s a reaffirmation of respect for our national sovereignty,” he added, referring to a letter he said he’d recently received from U.S. President Joe Biden.

Blinken’s meeting with Lopez Obrador in Mexico City came two months after Biden met with his Mexican counterpart at the White House, where Biden said the two neighbors need to rebuild relations.