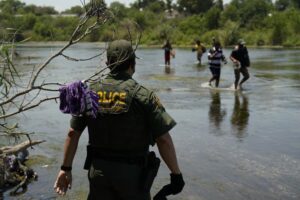 FORT WORTH, Texas (AP) — The U.S. Centers for Disease Control and Prevention will issue an order this week about how migrant children are treated under a public health order that has prevented people from seeking asylum at the nation’s borders, a Justice Department attorney said Tuesday.

The comment by Assistant U.S. Attorney Brian Stoltz at a court hearing in Fort Worth, Texas, comes as the Biden administration faces pressure from pro-immigration allies to lift the last major Trump-era restrictions on asylum at the border.

Stoltz told a federal judge that the CDC will release “a new order on the subject of the children” by the end of the week. It will revise a Biden administration policy announced in February that exempts children crossing alone from the ban on asylum.

Stoltz did not offer additional details on the changes during a hearing on a lawsuit that Texas brought to compel enforcement of the public health order that former President Donald Trump’s administration used to quickly expel people from the country during the coronavirus pandemic.

The government attorney said the CDC order this week will largely render Texas’ arguments moot. He did not elaborate, and CDC spokesman Tom Skinner said the agency had “nothing more to add right now.”

The CDC, in a three-paragraph order signed by its director, Dr. Rochelle Walensky, on Feb. 11, exempted unaccompanied children from being expelled to Mexico until “a forthcoming public health reassessment,” which has yet to be published. Texas argues in its lawsuit that the administration’s justification was insufficient.

Higher COVID-19 vaccination rates have brought increasing pressure on the Biden administration to lift the public health order that was always intended as a temporary measure during the pandemic. While the administration has exempted unaccompanied children, some families and nearly all adults traveling alone are expelled from the United States — often to Mexico within two hours — without a chance to seek asylum.