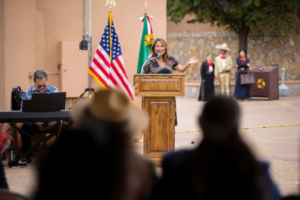 U.S. Rep. Veronica Escobar, D-El Paso, said inaction by Republicans in Congress is standing in the way of solving problems along the border.

During a news briefing Thursday morning, Escobar said she is “extremely frustrated” with “more of the same” from her Republican House colleagues.

“I wish there was more courage in Washington, D.C., to do the right thing and alleviate our border and stress in El Paso,” Escobar said. “I’m going to keep working on it.”

Even legislative action like a legal pathway to citizenship for Dreamers, which Escobar called “low-hanging fruit,” has proven difficult due to Republicans’ refusal to compromise on immigration reform, the congresswoman stated.

“The most frustrating component of this to me is Congress’ refusal to act on (immigration) solutions,” Escobar said. “We need to work on legal pathways. … We have a labor shortage and that can be addressed with legal migration. But when we shut down legal migration … we hamstring an administration, and there’s disorder at the border.”

The road ahead will only get rockier as Republicans claim the majority in the new Congress.

Escobar said that a draft immigration plan from U.S. Rep. Kevin McCarthy, R-Calif., who is a contender for speaker of the House, will allow for jailing children, cause overcrowded facilities, erode legal processes and further privatize migrant detention

“Which is exactly what’s causing our problems at the border,” Escobar said.

A large part of the conversation currently swirling around immigration concerns the end of Title 42, the Centers of Disease Control and Prevention policy used by former U.S. President Donald Trump to quickly expel asylum-seekers crossing the border during the height of the COVID-19 pandemic. Expulsions under the policy were deemed a violation of federal law in late November and are set to expire Dec. 21.