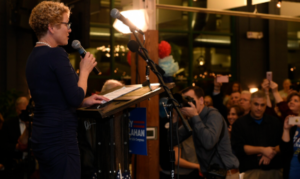 READING — There are a lot of frustrating things involved in the daily life of a freshman lawmaker, according to U.S. Rep. Chrissy Houlahan.

“One of the great things about being in Congress is when I write a letter, they have to write back,” said the Chester County Democrat who represents all of Chester and parts of southern Berks County, including the City of Reading.

Houlahan returned to Reading on Sunday to conduct her 10th town hall meeting in her eight months in office, taking written questions from an audience of about 80 people.

It was her third town hall in Berks County. She said she wants to maintain her focus on the Berks so voters here know she’s serious about representing all of the 6th Congressional District.

Houlahan said the district she represents is 40% Democrat, 40% Republican and 20% independent.

With the newly refurbished Penn Street Bridge gleaming in the bright sunshine a block away, Houlahan said the Trump administration is not doing enough to revitalize the nation’s aging infrastructure.

“President (Donald) Trump did talk a lot about infrastructure, and I really had a great deal of hope we would make some great progress,” she said. “It seemed like a good way to move forward in a bipartisan way. It looked like we would make some bipartisan progress, but that has all stalled, and I’m really doubtful we’ll be able to come to any kind of infrastructure deal.”

Nevertheless, Houlahan said she continues to press her colleagues on congressional infrastructure and appropriations committees so they know how important infrastructure is to Pennsylvanians.

During an appearance in early July at the Miller Center for the Arts, Houlahan said, “We need to have a frank discussion about the gas tax,” a topic she did not raise Sunday at her town hall at the GoggleWorks Center for the Arts.

Houlahan said Sunday that another concern she has is that available infrastructure monies seem to be going to the West Coast and southwestern states, or what she calls the newer economies.