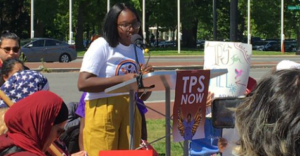 United States Homeland Security Secretary Alejandro Mayorkas addressed potential immigrants abroad in a video posted to Twitter Tuesday, commanding them not to come to the United States. “Do not come to the border,” Mayorkas demanded in the footage. “Families encountered will continue to be expelled… under Title 42.”

Immigrants from Latin America have reacted with disgust as they’re forced to endure dangerous refugee camp conditions while 100,000 Ukrainians have been streamlined to cross into the U.S. under Biden’s so-called “Uniting for Ukraine” plan.

In March, Mayorkas issued a memo which, as CBS News reported, “is designed to remind Customs and Border Protection (CBP) officers that their power to exempt certain migrants from Title 42… applies to Ukrainians seeking U.S. refuge.”

Since the establishment of the pandemic-related clause in 2020, Title 42 has reportedly been invoked to deport nearly 1.8 million immigrants–the vast majority of them from Latin American nations.

U.S. President Joe Biden late in April announced a “humanitarian parole program” known as “Uniting for Ukraine,” which his administration said will “provide an expedient channel for secure legal migration from Europe to the United States for Ukrainians who have a U.S. sponsor.”

The DHS described the “streamlined process” accorded to the privileged potential immigrants as the fulfillment of “President Biden’s commitment to welcome up to 100,000 Ukrainians.”

Secretary Mayorkas denies the existence of a double standard in the U.S. treatment of asylum-seekers and refugees, but immigrant rights activists have reacted with outrage after thousands of Ukrainians have reportedly crossed the border in just days, with few apparent hurdles.

On April 29th at an immigrant protest outside the U.S. consulate in Tijuana a demonstrator expressed: “we have rights as migrants to cross the border just like the Ukrainians,” as he denounced the discriminatory policy.

Back in March, at the time of the announcement of the exemptions to Title 42 restrictions for Ukrainians, the associate director of the immigration advocacy group Human Rights First expressed similar indignation: “Where were the exemptions for Haitian asylum-seekers arriving last fall? Where are those exemptions… for asylum-seekers from Guatemala, El Salvador and Honduras?”