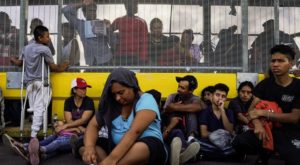 Central American migrants and asylum seekers already suffer from mental health issues stemming from the violence they are fleeing, but US and regional immigration policies are making matters much worse, according to a new report by Doctors Without Borders (Medecins Sans Frontieres, or MSF).

Violence both in the home country and Mexico is a key precipitating factor in alarming levels of symptoms of mental illness among migrants and asylum seekers from Honduras, El Salvador and Guatemala, according to a report published on Tuesday by the international humanitarian medical organisation.

“The violence to which Central American migrants and refugees are exposed has a clear impact on their mental health,” MSF said in its report.

The publication, No Way Out, draws on thousands of mental health consultations conducted by MSF in Central America and Mexico, interviews with personnel, and a survey of 480 migrants and asylum seekers at five shelters along migrant routes in Mexico.

‘Targeted in Mexico’
Of the hundreds of migrants and asylum seekers surveyed between January 2018 and September 2019, 61.9 percent had been exposed to at least one violent event in the two years prior to leaving their home country, including the violent death (42.5 percent) or disappearance (16.9 percent) of a relative.

During the same period, more than half of the thousands of migrant mental health consultation patients in Mexico presented moderate or serious symptoms, primarily related to anxiety, PTSD and depression.

“The violence suffered by people living in [Honduras, Guatemala and El Salvador] is comparable to that in war zones where [MSF] has been working for decades,” according to the organisation.