Home Resources US Parties Deadlocked on Immigration as Shutdown Looms 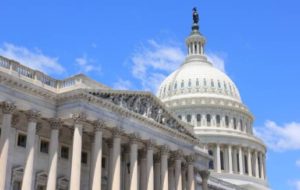 Politicians in Washington will try to resolve deep-seated divisions on immigration in the coming days in order to avert a partial government shutdown on Friday.

Senators arrived back in Washington on Monday night for their final week of this congressional session, while the House of Representatives will reconvene on Wednesday. Some government funding – including for the department of homeland security – is set to expire at midnight on Friday if a deal is not reached on immigration.

But there was little sign of a breakthrough as the week commenced. US president Donald Trump is seeking $5 billion (€4.4 billion) in funding for his border wall, but Democrats are resisting.

Tweeting on Monday, Mr Trump said: “Anytime you hear a Democrat saying that you can have good Border Security without a Wall, write them off as just another politician following the party line. Time for us to save billions of dollars a year and have, at the same time, far greater safety and control!”

Mr Trump’s apparent intransigence over the border wall was echoed by senior White House adviser Stephen Miller over the weekend, who said that the Trump administration would be prepared to allow a government shutdown if money was not provided for the president’s proposed border wall.

“At stake is the question of whether or not the United States remains a sovereign country. Whether or not we can establish and enforce rules for entrance into our country.”