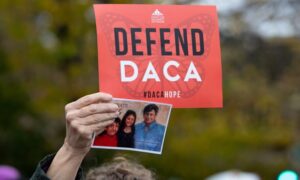 Joe Biden has said the US Department of Justice intends on appealing a new court decision that effectively halts an Obama-era program aimed at protecting young immigrants from deportation.

Texas federal judge Andrew Hanen on Friday deemed illegal the Deferred Action for Childhood Arrivals (Daca) program. This program prevents the deportation of immigrants who were brought to the US unlawfully as children, known as “Dreamers”.

This ruling bars the government from approving any new applications – in other words, suspending Daca. For now, Daca is preserved for the more than 616,000 people enrolled in the program until other courts weigh in. Hanen’s decision is also in favor of the eight other conservative states suing to thwart Daca.

“Yesterday’s federal court ruling is deeply disappointing. While the court’s order does not now affect current Daca recipients, this decision nonetheless relegates hundreds of thousands of young immigrants to an uncertain future,” the president’s statement said.

“The Department of Justice intends to appeal this decision in order to preserve and fortify Daca. And, as the court recognized, the Department of Homeland Security plans to issue a proposed rule concerning Daca in the near future.”

Daca has come under fire from conservatives since its creation in 2012. Texas in 2018 requested to halt the program through a preliminary injunction.

While Hanen denied this request, his ruling then appears to have presaged. Hanen stated that he believed Daca, as instituted, was probably unconstitutional without Congress’s approval.

Hanen also decided in 2015 that Barack Obama could not broaden Daca protections or implement a program that protected Dreamers’ parents.

By Victoria Bekiempis For THE GUARDIAN
Read Full Article HERE