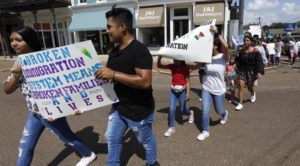 A United States federal appeals court in New York has refused to lift an injunction blocking the administration of President Donald Trump from enforcing a rule that would have allowed it to connect the use of public benefits with whether immigrants could be granted visas or become permanent residents.

The so-called “public charge” rule unveiled last year would make it harder for immigrants who are poor or need government help to secure a visa or a green card that would allow them residency in the country.

The new rule would significantly expand what factors would be considered to make the determination of whether an applicant would need public assistance. If it is decided that immigrants could potentially become public charges at any point in the future, their visa or residency could be denied under this rule.

Roughly 544,000 people apply for US green cards annually. According to the government, about 382,000 of those are in categories that would make them subject to the new review. Critics have said the rule would keep out disproportionately large numbers of people from Latin American, African and Asian countries.

Immigrants make up a small portion of those getting public benefits, since many are ineligible to get them because of their immigration status.

In a brief order, the 2nd US Circuit Court of Appeals in Manhattan also set a sped-up schedule for the White House’s appeal of a lower court ruling against the rule, with legal papers to be submitted by February 14 and oral arguments to be held soon afterwards.

The office of New York State Attorney General Letitia James, which led opposition to the rule, did not immediately respond to similar requests.

Trump has made immigration a centrepiece of his administration and 2020 re-election campaign, and the public charge rule has been among his signature policies to curtail immigration.